The final beam was lifted in to place for a new bridge that will connect part of Ebbsfleet Garden City with Ebbsfleet International station.

Springhead Bridge will reduce the reliance on the car for residents at Springhead Park and they will be able to walk to the station in eight minutes. Work started in May last year and the bridge will be complete and open to the public in spring 2020.

With the final sections of steel in place for the bridge, a  concrete deck, road surfacing and utilities will be installed in preparation for the public opening.

Julia Gregory, Director of Projects with Ebbsfleet Development Corporation, which has built the £16million bridge, said the project had been a real feat of precision engineering.

She said: “Not only does this bridge cross a river but it is also next to the High Speed line so you can imagine the engineering precision and skill that went into every stage of planning. Engineers work within only a few millimetres to ensure the steel beams fitted correctly

“When it is open, the bridge will provide an easy route on a dedicated walking lane for residents of Springhead Park who want to leave their car at home and get to Ebbsfleet International.

“It will also provide  a cycle track and access for all vehicles including a new Fastrack bus route.”

Nick Osborne, Balfour Beatty Regional Director of Operations in the South of England, said: “With the final steel girders now secured in place, we look forward to the local community experiencing the extensive benefits of the bridge next year.

“The delivery of this exciting milestone is testament to the skills and expertise of our dedicated team and supply chain who are proud to be creating a positive legacy for the travelling public in Ebbsfleet.”

The design and construction of the bridge focused on providing access across the river whilst minimising the impact on the local environment.

Ecologists have been consulted throughout the project to prevent damage to the ecosystem and the team have programmed works to avoid noise that would impact on the bird nesting season.

Prior to construction a special  barrier was installed to prevent reptile and amphibians from entering the site, therefore protecting the local populations.

The bridge has also brought many added benefits to the local community in addition to the link to the station (see image). 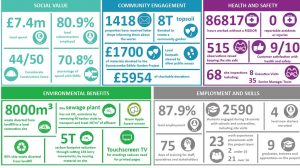 Ebbsfleet Garden City now has 1,700 homes with approximately 4,000 new residents. It’s first primary school opened in 2017, a second is currently under construction and a third is in the pipeline as well as a major secondary and primary education campus.

A pub and hotel  opened two years ago at Ebbsfleet Green and  plans for a second are also under way in Castle Hill. The Garden City’s first supermarket opened this summer and the creation of the very first village centre at Castle Hill which includes a second supermarket are at an advanced stage.