Up to 70 charities are to benefit to mark 70 years of the NHS in Ebbsfleet Garden City.

The Garden City is one of ten NHS-designated Healthy New Towns and hundreds of people have been using an app which gives people rewards for physical activity.

To mark the NHS milestone birthday, 70 people using the BetterPoints app will be entered into a prize draw to win £70 – half of which will go to their chosen charity.

The Healthy New Towns Programme has today (Thursday July 5) run a community day at Ebbsfleet International Station to mark the special anniversary with children from local schools taking part in circus workshop skills, football with Ebbsfleet United and a special virtual reality machine which let them look inside a human body.

There was also fitness classes run by Snap Fitness and children got a goodie bag with fruit and water and info on how to be healthy. 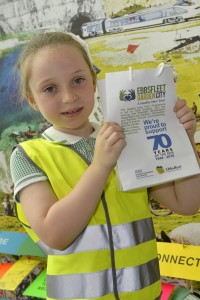 Kevin McGeough, Director of Ebbsfleet Garden City Healthy New Towns, said: “Our app has been incredibly successful with hundreds of people downloading it in the first few weeks.

“We wanted to encourage even more activity on this special day so our prize draw will give those people who are already active a real boost. The winners will be able to receive £35 in shopping vouchers for themselves then choose a charity on the app to donate £35 to.

“Marking the 70th anniversary of the NHS gives us the perfect opportunity to continue to promote the positive benefits of an active lifestyle for all ages and continue to show that keeping fit is fun.” 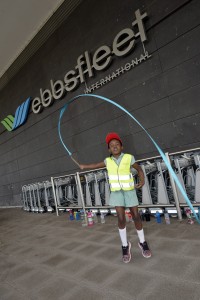 A number of innovative ideas have already been started including a scheme where 120 people are currently having their fitness levels monitored wearing a Fitbit to not only record activity but also show what routes people are using for walking, cycling and running  to help inform future investment and priorities for new infrastructure as the development expands.

There are also two community gardens in Swanscombe and Northfleet dubbed Edible Ebbsfleet where people can pick free fruit and veg in a scheme that is also being rolled out to local schools.

You can download the app on Android and Apple by searching for BetterPoints in the app stores or through ebbsfleetdc.org.uk