IT will only be their home for a short time, but buying a property at Ebbsfleet Garden City is a long term investment for Sheila and Jim Briggs.

The couple, from Rainham, Kent, have moved in to a two-bedroom Abode style Redrow home at Ebbsfleet Green while their existing four-bedroom detached property is renovated.

“What started off fairly small scale has grown into quite a large project where we had to leave the house as it was almost being rebuilt over the course of eight months,” Sheila explains.

“We considered renting but as my husband is thinking about retirement or semi-retirement we thought about investing some of his pension pot and dovetailing the two things – somewhere to live while our home’s being renovated, then renting that property out when we move back in to our home.”

They were aware of Redrow’s Ebbsfleet Green development as Jim catches the train from Ebbsfleet International into London when he works in the capital. 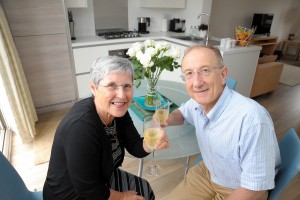 After doing some research they visited the sales hub, describing the sales team as positive, friendly and encouraging.

“They seemed to understand that we needed to buy somewhere fairly quickly as we were on a tight timescale because of the build,” Sheila says.

They’d been thinking of buying an apartment, but with none ready to move into they arranged to view a two-bedroom terraced Abode style home.

“We were absolutely delighted with it as it’s a very attractive house. We were given a lot of information about the whole development.  We appreciated the amount of time the sales team dedicated to us,” Sheila says.

“There was never any rush and they answered any questions we had fully, not only about how Redrow is developing the area, but the wider Ebbsfleet Garden City. It helped us build up a picture of the overall development, which has tremendous potential. We tried very hard to see it from the point of view of our future tenants because we won’t be living here in the long run. We want them to be able to access as many facilities as possible and we wanted to know that there would be schools and shops and places where people could walk.”

She adds: “The location is perfect for someone working in London because you can walk to the station and then it’s only 17 minutes to St Pancras on the train. Or if you like shopping, Blue Water is five minutes away in the car.

Along with the location, quality of finish was important for the couple, who bought their first home as a new build in 1975.

“The design of the house is very light, bright and airy,” Sheila says. “In terms of eventually renting it out, the fact that each bedroom has an en-suite is a huge positive, plus there are two allocated parking spaces.”

Sheila is a retired teacher. Jim is a semi-retired chemical engineer. They’re both 66.

“The sales team have been friendly, accommodating and professional,” Sheila adds. “They want to know about you as a person, which makes a huge difference. And they’ve been keen to know how the work on our other home is going.”

All of the Abode style homes at Ebbsfleet Green have now been sold, but Redrow has a good choice of properties available from apartments to family homes, with current prices from £265,000.

Help to Buy equity loans are available on selected properties for owner-occupiers. The Government-backed scheme reduces both the size of the deposit and mortgage required, making homeownership easier to afford.