People living in Ebbsfleet Garden City and the surrounding area are now able to earn rewards for keeping active in an NHS-backed project.

Ebbsfleet Garden City Healthy New Towns programme has joined the BetterPoints app which logs activity like running walking and cycling and turns it into points and rewards.

Points are earned each time activity is logged and the cash value rewards can be used with a range of national retailers like Amazon, Debenhams and Argos or can be donated to charities such as Cancer Research and the British Heart Foundation. 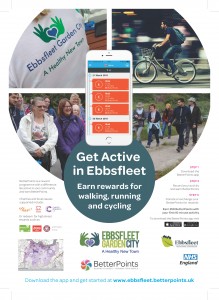 One local charity that you can donate to through the app is ellenor , which helps families dealing with terminal illness.

The app is open to anyone living or working in Ebbsfleet Garden City as well as Dartford, Gravesham and Swanley residents and workers. The NHS has used the app in other parts of the country to get people thinking about their activity levels.

Kevin McGeough, Director of Ebbsfleet Healthy New Towns, said: “Being rewarded is a great motivator for staying active and that’s why joining this programme makes sense.

“When you’ve earned enough points you’ll be able to redeem them against some great local or national offers or give the money you’ve got from staying active straight to charity.”

.A number of innovative ideas have already been started including a scheme where 120 people are currently having their fitness levels monitored wearing a Fitbit to not only record activity but also show what routes people are using for walking, cycling and running  to help inform future investment and priorities for new infrastructure as the development expands.