Ebbsfleet Garden City is to get its second primary after plans were approved for a 420-pupil school.

Hope Community School will be run by the New Generation Schools Trust at Springhead Park, where hundreds of new home are being built.

Ebbsfleet Development Corporation gave planning approval for the school and a nursery and it is expected the school will be open for new pupils in September 2018 with admissions for the reception class already open.

The plans for the free school were submitted by the Education and Skills Funding Agency (ESFA), who are an agency sponsored by the Department for Education and accountable for Government funding for the provision of new education facilities. 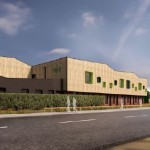 “The growth of the Garden City continues at real pace with many leading house builders on site and more to come in 2018.”

Paul Weston, Chairman of New Generation Schools Trust, said: “We are delighted to have reached this important milestone in the delivery of a brand new school for the community of Northfleet. The design process has been challenging and exciting and the end result is a modern, purpose built facility which will provide an outstanding educational environment for local families.”

There will be a third new primary school expected in 2020 after plans were approved as part of a 600-home scheme by Keepmoat in Northfleet East.

More than 600 new homes were started in Ebbsfleet Garden City in the last year as and the area also saw its first pub and restaurant opening.

A new hotel will open in January and the Ebbsfleet Development Corporation recently announced a series of multi-million pound investments in electricity provision and improvements to the A2 as well as creating a network of cycle and walking routes to link up the entire Garden City.