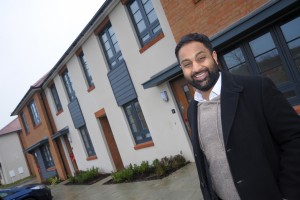 MORE than 90% of purchasers of new Redrow homes at Ebbsfleet Green are first time buyers priced out of the London market.

Ideally situated less than 20 minutes by train from Central London, the Abode style homes are perfectly placed for those looking for an alternative to the premiums properties in the capital command.

In fact a brand new apartment could be purchased for almost half the average price paid by first time buyers in London last year.

Factor in the chance to be part of Ebbsfleet Garden City, the first garden city for 100 years, and it’s no surprise that Ebbsfleet Green is a popular choice.

To date 25 Abode style homes, plus 11 apartments have been sold. All but three of them have been purchased by first time buyers who work in London.

Among them is 33-year-old Bal Sandhu, a self-employed contractor for an investment bank, who was one of the first to reserve.

He’d been eagerly anticipating the development’s launch and registered his interest in the properties a couple of years ago.

“About six years ago I moved back in with my parents after university as I was working in London and wanted to save for a deposit for a home of my own,” Bal explains.

“I knew I wanted a three-bedroom freehold property as close to London as possible. When I started looking my budget would only have enabled me to buy further away and in areas I didn’t want to live. Waiting has enabled me to raise a bigger deposit so that I could buy closer to London.”

Because of the high volume of enquiries about Ebbsfleet Green, Redrow distributed a survey to prequalify potential purchasers before inviting them to launch events.

“I think I was about 10th in the queue on the day,” Bal recalls.

“Redrow have a really good reputation and I had my heart set on buying from them because I have friends and family who have bought Redrow homes. There were only a few three-bedroom homes on release and so I paid the reservation fee straight away. At that point there wasn’t even a sales office on site at Ebbsfleet, but Jo and Emily the sales consultants were really good, recommending mortgage specialists and solicitors and keeping me updated about the build progress.”

Bal’s new home isn’t far from his parents’ house, but offers a faster route into London.

“I’m precious about my sleep and have worked out that it will save 30 minutes in the morning or if you take the return journey into account, five hours a week,” he laughs.

“This is certainly an up and coming area and being part of the wider garden city project makes it a good investment if I want to move on or rent the property out in future.”

Rachael Baillie, sales director for Redrow Homes, said: “The average first time buyer in London can now expect to pay more than £400,000 to get onto the property ladder, but by expanding their search to just a 20-minute train ride out of the capital to Ebbsfleet Green they could see their housing costs almost halved. It’s a move increasing numbers of people are making and as the new neighbourhood takes shape we’re predicting that even more London workers will leave the capital for a new life at Ebbsfleet Garden City.”

Plans for Ebbsfleet Garden City’s first pub and hotel to complement the Redrow homes at Ebbsfleet Green were recently approved.