Well, schools are back, and summer is officially over (just ask the weather!).

We’ve had a wonderful month, both at home and on holiday, but now it’s time to settle back in routine and for me that means getting stuck into a few house projects.

Over the past year I’ve started to dip my toe in the DIY pool and have really enjoyed making simple décor changes in our house, which have completely transformed it from being a ‘typical new-build’.

When we were looking at moving to Kent, I was completely set on buying a new property, as not only did they offer more space, but I also liked the idea of everything being purpose-built, clean, neutral and essentially a blank canvas.

However, once we were in our new home, I realised that my personal style is actually much more characterful than I had thought! My motto has done a 180 from ‘grey all the way’ to ‘green is the new black’, and I’ve developed a penchant for panelling.

Everything we have done to our home has been completed ourselves and to a serious budget (as I’m sure most people can relate to, once you’ve bought a house, there isn’t much cash left over!). Here are a few ways that I have managed to bring character and colour into our new-build home. 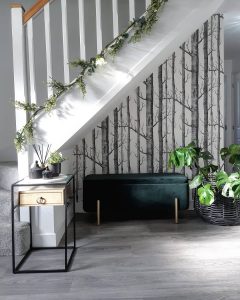 There is a lot of discussion over when you should paint and wallpaper a new-build property. Developers advise leaving the walls for 6-12 months after moving in, due to the need to let the house settle and the drying-out process complete. It is very normal for cracks to appear in the walls and gaps to widen by the skirting boards during this time, so in a nutshell, it may just be a waste of time and money to decorate before this has happened.

We personally decided to crack on (pun!) after 6 months – we had lived in our house long enough to have some ideas on what we wanted and as we were going to do everything ourselves, didn’t mind if we had to paint over a few cracks a few more months down the line.

A year in and we only have one ‘major ‘wall crack, which is in the bathroom running down the (now very, very dark blue!) wall from the edge of the windowsill. A bit of filler will sort it out, as it isn’t wide enough for our developer to come and fix themselves – only cracks above 2mm (about the size to fit a pound coin) come under the warrantee.

Feature wallpaper is the perfect way to inject some personality and colour into a room, and I’ve found that the right print can make enough of a statement without needing to paint the rest of the walls. I’ve used an amazing green tropical pattern in our master bedroom, which has a slight metallic sheen to the background and gives a boutique hotel feel to the room. In contrast, our guest bedroom has a relaxing, scandi-inspired grey birch tree paper framing the headboard. 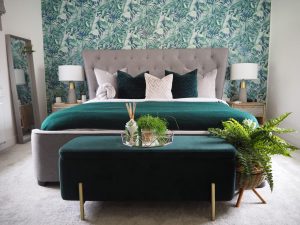 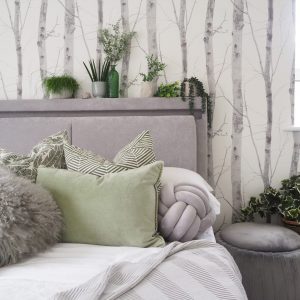 The main feature of my youngest son’s nursery is a hand-painted mountain mural, which scales all four walls of the room. I had initially been looking for wall decals to achieve this look, however then decided to paint it myself so I could add my own individual details and chose exactly what colours I wanted. The entire room was done for under £20 by buying £3 tester pots rather than full tins of paint. All I needed to create this was some painters tape and a small paint roller, so this is definitely a great project for any amateur decorators who want to add some fun geometric designs to the walls. 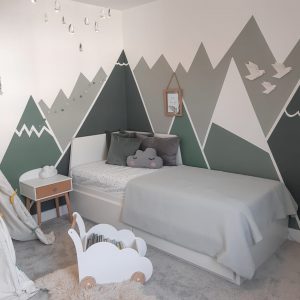 Seeing as we live in the Garden City, it only seemed right that our home interior centre around the relaxing calm of indoor greenery. I am a huge fan of house plants (I’ve been known to wander around chatting to them as though they were my children) and have a combination of real and artificial foliage in every single room in my house. While faux is nice and low-maintenance, real potted plants bring numerous benefits to your physical health and mental mood. Not only do plants release oxygen, freshen the air and increase humidity (reducing dry skin and colds, coughs & sore throats), but studies have shown that they also increase your concentration, memory and productivity. I’ve found that the easiest plants to care for are the tropical variety, as they only need watering every two weeks or so and don’t require direct sunlight. I’ve turned all three of our bathrooms into jungle spas – see if you can spot the real plants from the fake! 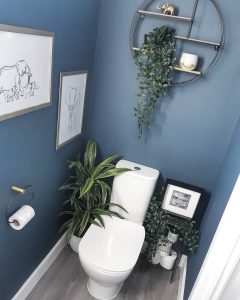 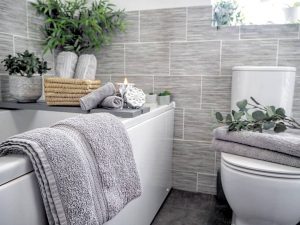 No longer just for period properties, panelling is a huge interior trend at the moment, and one I am fully embracing! It can be used to hide wires, flaws in the wall, create hidden storage or simply decorative. I have plans to put some traditional decorative wall panelling in our lounge, however my current project is creating a modern, geometric panelled feature wall in our playroom/dining room space. My preparation for this included scouring DIY blogs online and relying on my husband’s superior mathematical abilities to properly measure and cut the boards at the correct angles. 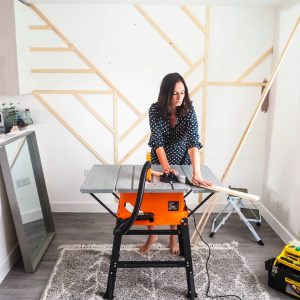 If you’d like to see the finished playroom, as well as more photos of my home interior and detailed DIY how-tos, give me a follow on Instagram at @lydias_layton_life ! Hopefully I’ve given anyone despairing over their plain new-build walls some practical inspiration on how you can inject some character and style – I love the fact that while developments such as ours may look like streets of cookie-cutter homes, each one is entirely unique inside.