Up to 90 jobs are to be created in Ebbsfleet Garden City after plans to redevelop an industrial estate were  approved. 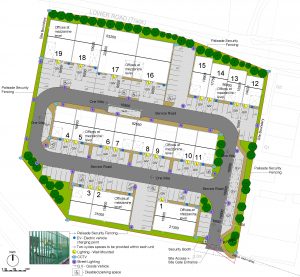 The new plans, by Benrose Property, (left) will increase the commercial floorspace and will see up to 90 jobs created.

Only a quarter of the site is currently occupied but  when complete the estate will have 19 new units.

A scheme for 100 homes on land at Craylands Lane in Ebbsfleet Garden City was also approved (pictured above).

Bellway Homes will build 50 houses and 50 apartments including 30 affordable homes. The land has not been used in a decade since it was occupied by a plant hire company.

Plans for a second pub and hotel are due to be submitted next year and plans are being drawn up for a £55million primary and secondary school campus in Eastern Quarry.

Ebbsfleet Development Corporation also recently announced it had employed a commercial property agency to work on its plans for a new city centre around Ebbsfleet International station.