TWO MPs saw how Ebbsfleet Garden City is rapidly becoming the place for new aspiring home owners to settle and saw the pace at which the area is growing.

Dartford MP Gareth Johnson and Gravesham MP Adam Holloway went on site at Springhead Park to see 110 new homes being built by Countryside and at Ebbsfleet Green where Redrow is building 950 homes.

They also heard how the Garden City’s first primary school, Cherry Orchard, will be open at Castle Hill this September and will cater for 420-pupils as well as providing community facilities.

And they were told of plans that have just been approved for the former Northfleet Cement works in Northfleet West which will see up to 532 new homes as well as employment space creating up to 1,500 new jobs and at Northfleet East where the Ebbsfleet Development Corporation (EDC) and Gravesham Council will soon submit £35million plans for a new commercial centre that will create almost 700 jobs.

A planning application for more than 600 new homes by Keepmoat at Northfleet East will also be submitted soon.

Gareth Johnson said: “I was particularly pleased to see the real progress being made with the new primary school at Castle Hill, providing much needed places in this part of the world.

“The planning application was approved less than a year ago yet today you can see the entire building coming out of the ground and the project taking shape ready for an opening in September.”

Adam Holloway said: “The plans for Northfleet East and West will provide a much needed boost to this area.

“Not only will local people have access to good quality new housing and have the chance to walk along a promenade that opens up that part of the Thames to the public for the first time in 100 years, but they’ll also have the opportunity of hundreds of much-needed local jobs.” 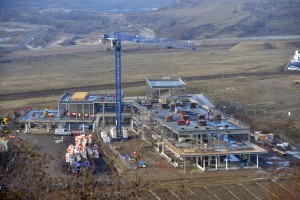 Ebbsfleet Garden City was recently announced as one of 30 areas in the country to spearhead the Government’s new starter homes scheme, meaning younger people will get a hand to get on to the property ladder in the Garden City as up to 635 homes could have discounts of at least 20 per cent below market value.

Redrow recently revealed that 90 per cent of its new customers were first time local buyers using the Help to Buy scheme.

“Working with private sector partners and land owners, the EDC has ensured the pace of development took significant strides in 2016 and that it will continue in 2017/18.”