Nearly 600 new homes and a new primary school in a brand new waterfront development were approved by planners in Ebbsfleet Garden City tonight.

Keepmoat Homes was given approval for 598 new homes including family homes and apartments in Northfleet, on the banks of the River Thames.

A new waterfront promenade and children’s park will open up the Thames to the public in that area for the first time in 100 years on old chalk and cement works industrial land.

As well as outline planning permission for a  new primary school, the plans approved included new riverfront retail space and community facilities as well as  improvements to the prominent  WT Henley building which has been in a state of disrepair for years. 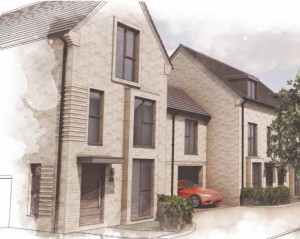 The scheme also pays tribute to the former Rosherville Pleasure Gardens which was a Victorian leisure destination and featured a live bear in a pit. There will be a circular open space above the buried pit and it may include a bear statue in the future.

Ebbsfleet Development Corporation’s planning committee heard that there was a good mix of properties in the plan, including traditional affordable housing, wheelchair accessible dwellings and starter homes.

In total there will be 149 Starter Homes, 38 homes will be for affordable rent and 37 will be shared ownership, representing almost 40 per cent of the development.

The new development on land known as Northfleet East will neighbour an area set aside for new employment opportunities and land at Northfleet West where 532 homes will be built as well as employment space that could see up to 1,600 new jobs created.

An Ebbsfleet Development Corporation spokesman said: “This is a high-quality development that will not only command great views of the River Thames but also open up the river with a new promenade, allowing people to walk along and see it from the area for the first time in a century.

“The development will allow people on average salaries to get their foot on the property ladder throughaffordable homes and shared ownership and also provide great family homes.

“A series of new walking and cycling routes will link Keepmoat’s development with the rest of Ebbsfleet Garden City, giving residents easy access around the area and to Ebbsfleet International Station.”

Roland Grant, Regional Managing Director of Keepmoat Homes South said: “The Northfleet site is a landmark development for Keepmoat Homes and represents the largest and most significant award in the area, since we expanded the business in to London and the South East in 2014.

“This is an important milestone in ensuring this scheme becomes a reality, and the acquisition and development of Northfleet will meet the clear demand in the region. It is another positive step for Keepmoat Homes’ ambitious growth plans in the Thames Gateway.

“It makes an important contribution to the continued delivery of the Ebbsfleet Garden City project and we  are also pleased to be working with the Ebbsfleet Development Corporation in fulfilling both their vision and meeting their targets for the creation of this new and exciting garden city.”

A new primary school has now opened in Castle Hill as well as restaurant and pub in Ebbsfleet Green along with a new hotel set to open in January.

The corporation is also investing £45million to improve two junctions of the A2 at Ebbsfleet Garden City as well as a £30million investment in electricity to help speed up delivery of new homes.