To see a transcript of this film click here

As part of the Healthy New Town programme, from September 2018 to March 2019 EDC commissioned three community art projects to explore, health, wellbeing, food, belonging and identity through creativity.  Our first Gathering event was so successful that we ran another one in 2020.

The Winter Gathering took place at Castle Hill Community Centre on 7th February 2020. The city-wide event attracted between around 500 local residents from the Garden City and neighbouring communities. 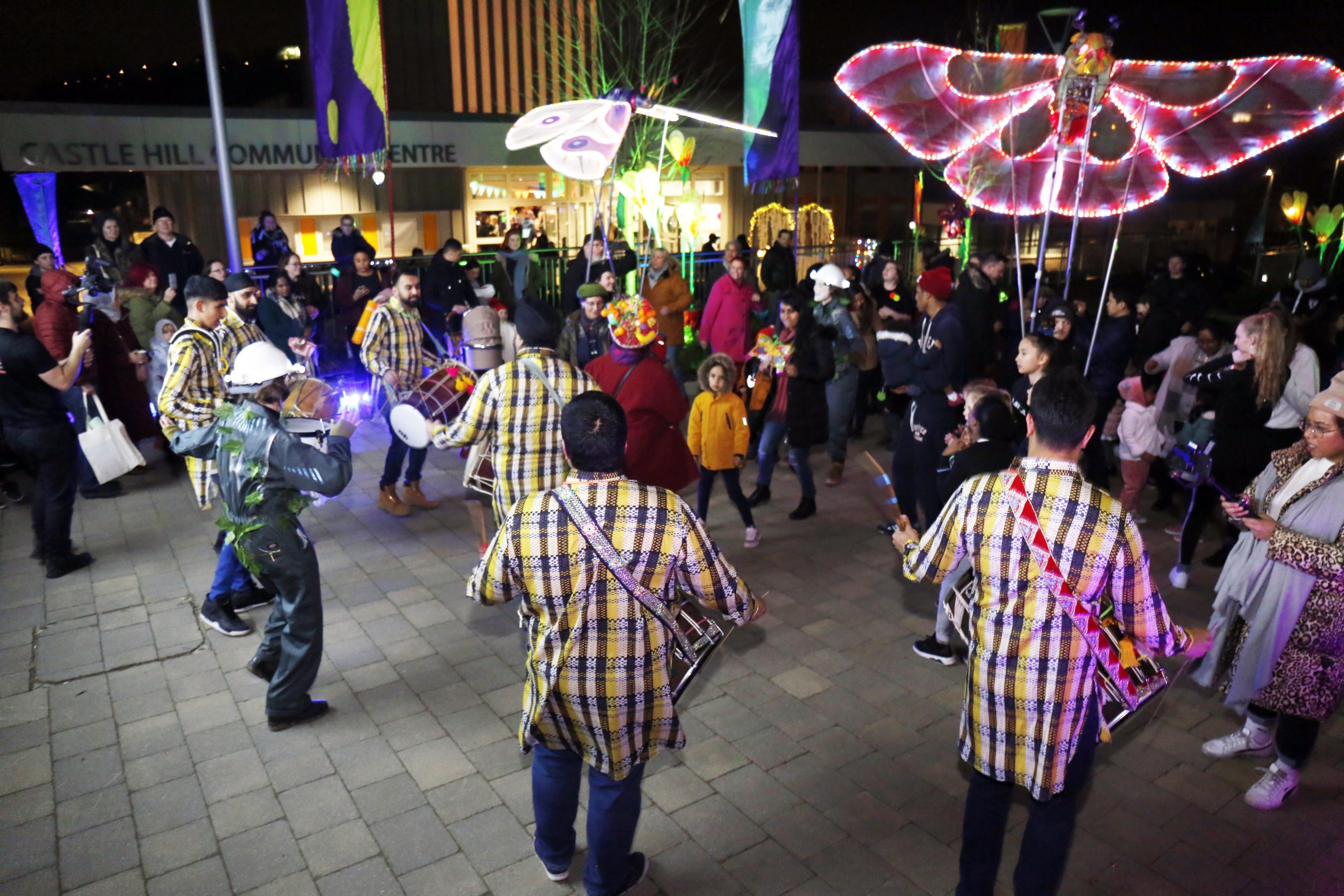 The event was produced and co-curated by local arts organisation LV21 in collaboration with local schools and community groups. The event combined the Enchanted Illuminated Garden with costumed moth performers by Emergency Exit Arts; Magic Lantern Show based on Rosherville Gardens by Nicole Mollett and Frog Morris; Tightwire and “glow in the dark” juggling workshop with Dizzy O’Dare; 4 x 4 Dhol Drummers and Fleet Gymnastics; art installations, ‘have a go’ creative activities across artforms and performances with and by local artists and community groups, plus a tasty warming food and drink offer.

To support the community participation element in the run up to the main event, people from different groups were encouraged to record Vox pop soundbites answering the question ‘what’s great about my community?’ to create this soundscape which was played in-between performances in the enchanted garden. Listen here 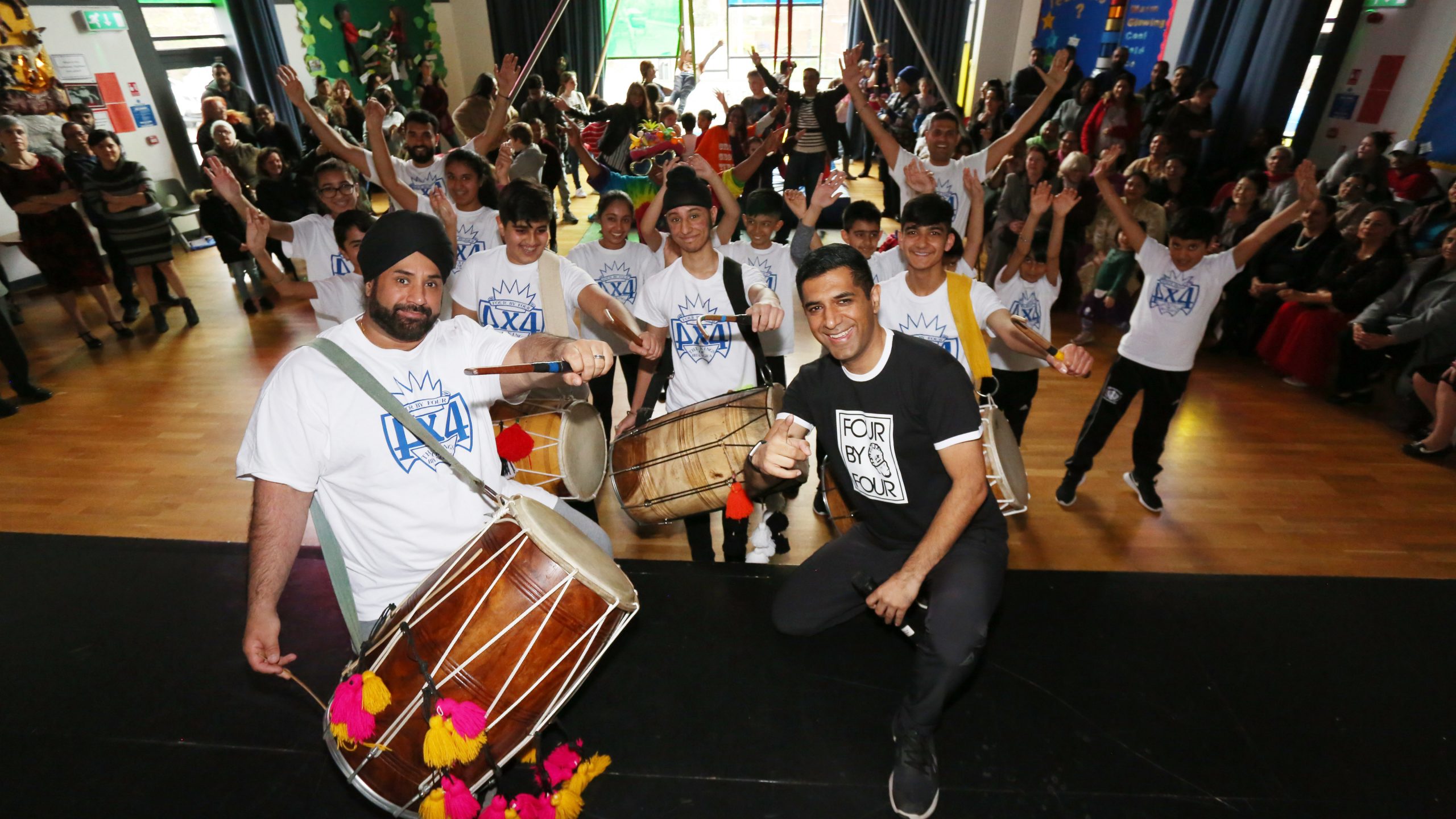 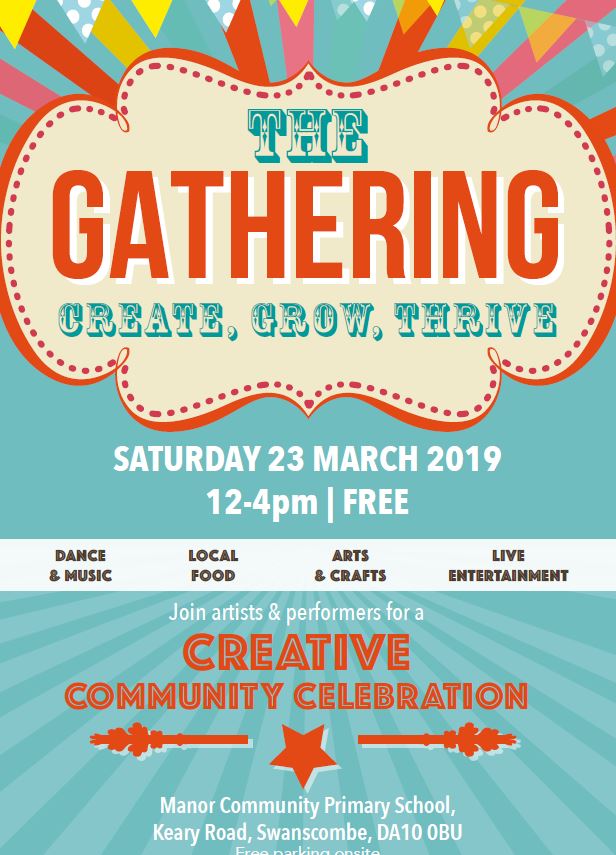 was the culmination of The Healthy New Town Programme, bringing together artists and local communities for a celebration of arts, creativity, food, and wellbeing. The event took place at Manor Community Primary School in Swanscombe on March 23rd, 2019.

Three community art projects were showcased at the event and local people were invited to have a go at drawing, sculpture, printing, dhol drumming, bhangra dancing and aerial acrobatics. Locally produced food linked to the projects was served including watercress soup and samosas. Participants gave an overwhelmingly positive response to the event:

“Absolutely fantastic! What a wonderful way of bringing a community together!! ”

“What a perfect afternoon! I feel uplifted by the experience”

was a community art project led by Nicole Mollett which collected recipes and food stories from Swanscombe, Northfleet and Ebbsfleet. 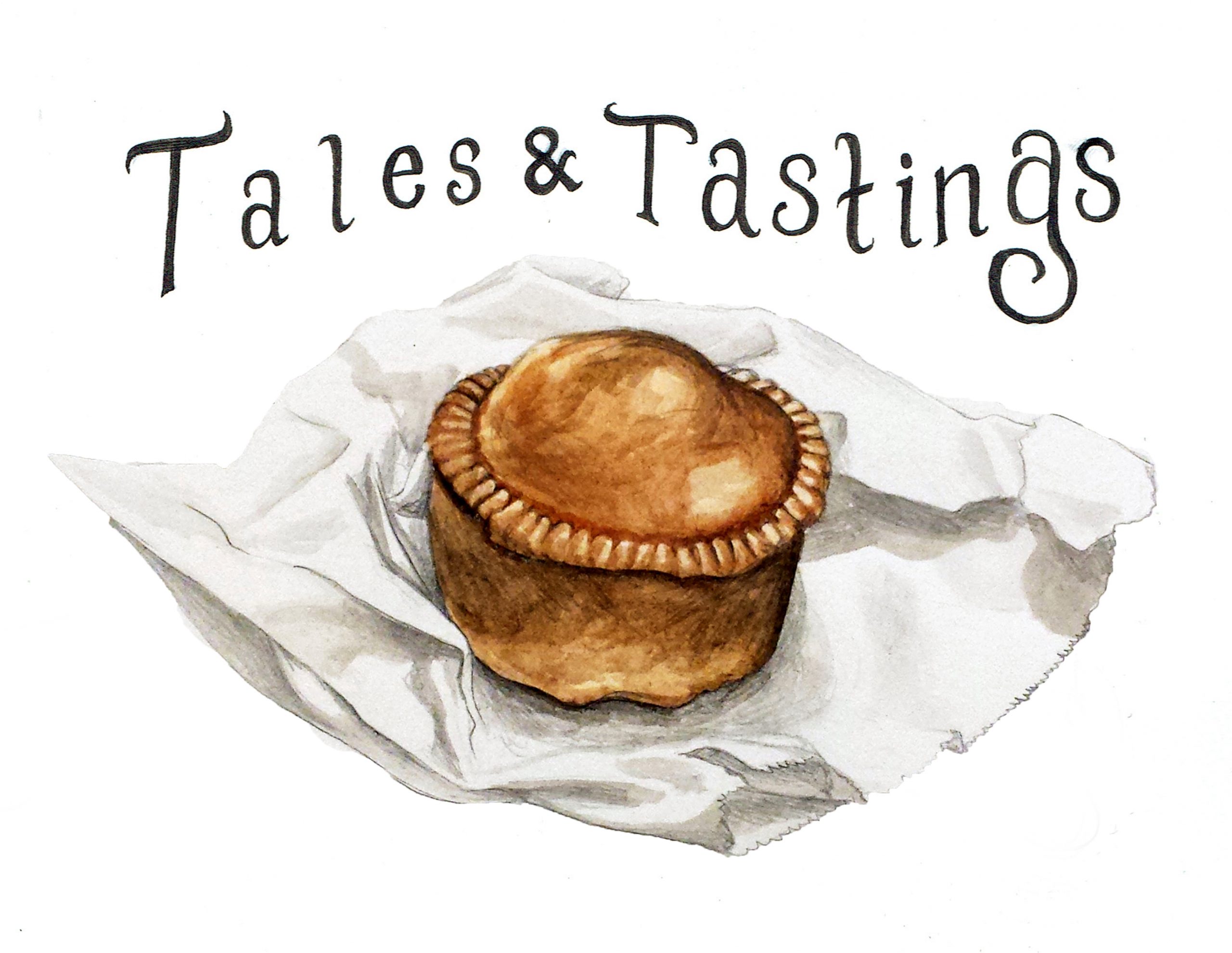 Nicole led drawing workshops at Ebbsfleet Academy and The Craylands School. She collected personal food stories from local community groups, senior lunch clubs, and individual residents. Everyone was invited to contribute a tale via special post boxes in local libraries. 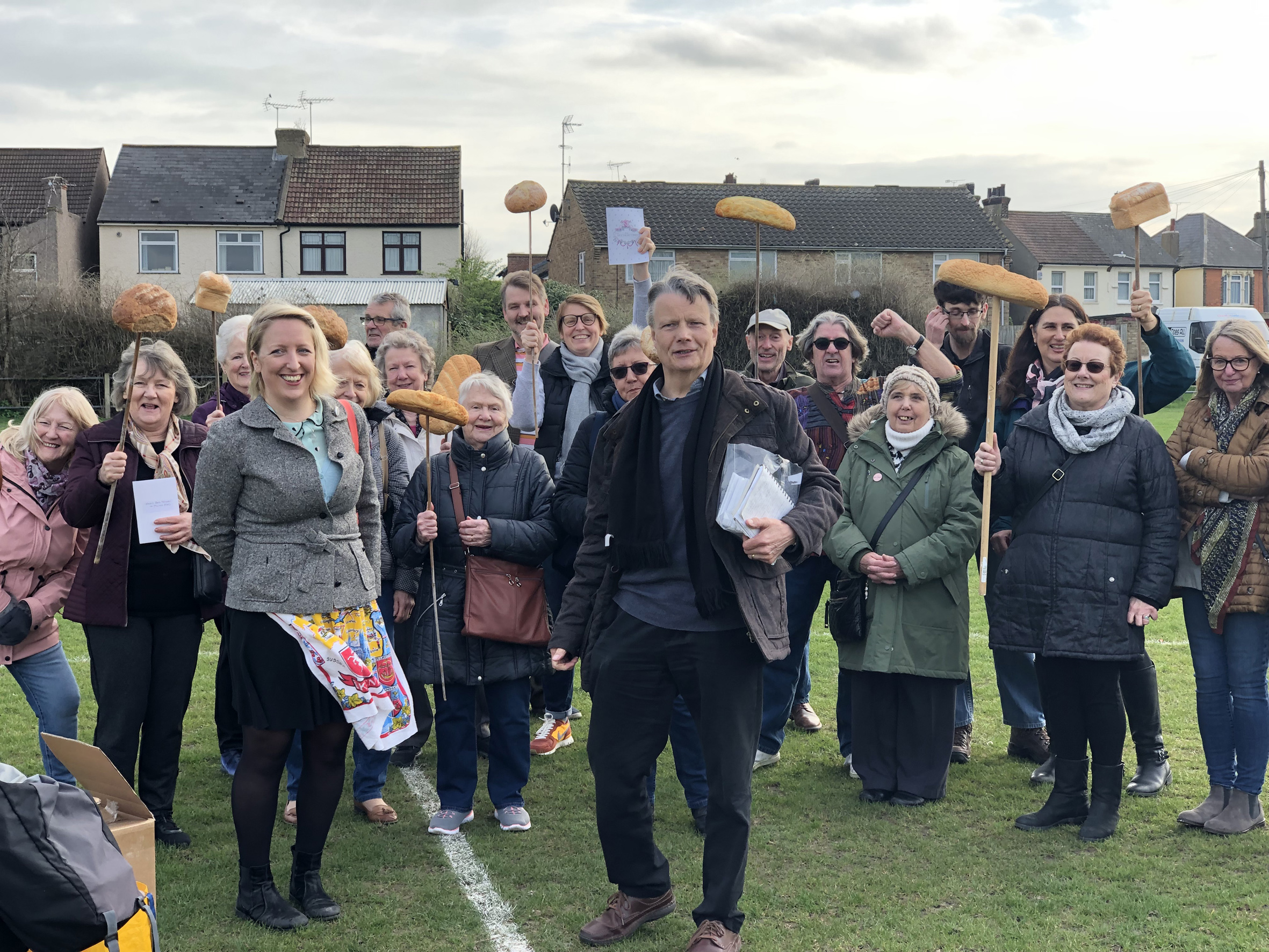 The final collection of drawings, recipes and texts was presented in a beautiful book. The Gathering event included an exhibition of 50 original drawings by Nicole and the students, and some prototype ceramic cups and bowls inspired by local grotesque church architecture. Visitors could taste locally produced ‘Pickle Me Up Frank’ chili jam which featured as one of the stories in the book.

During the event, a group of 30 participants were led by local historian Christoph Bull on an alternative tasting tour of Swanscombe. Nicole provided food tastings for each story including shrimps, watercress, cured meat, jam sandwiches, ice cream, and Kentish ginger beer. Click below to download the booklet 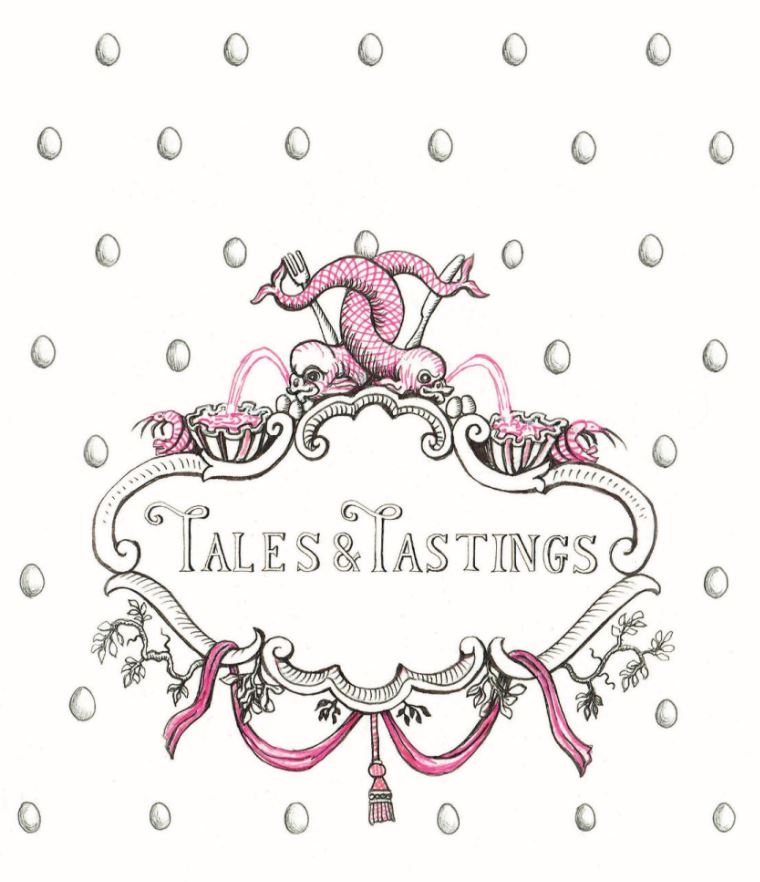 was a project led by artist and cheese monger Esther Collins. Esther met with people in Castle Hill, Northfleet and Greenhithe using cheese tasting as a starting point for conversations about skills and interests in arts, crafts, and food. This led to connections between existing and new residents. 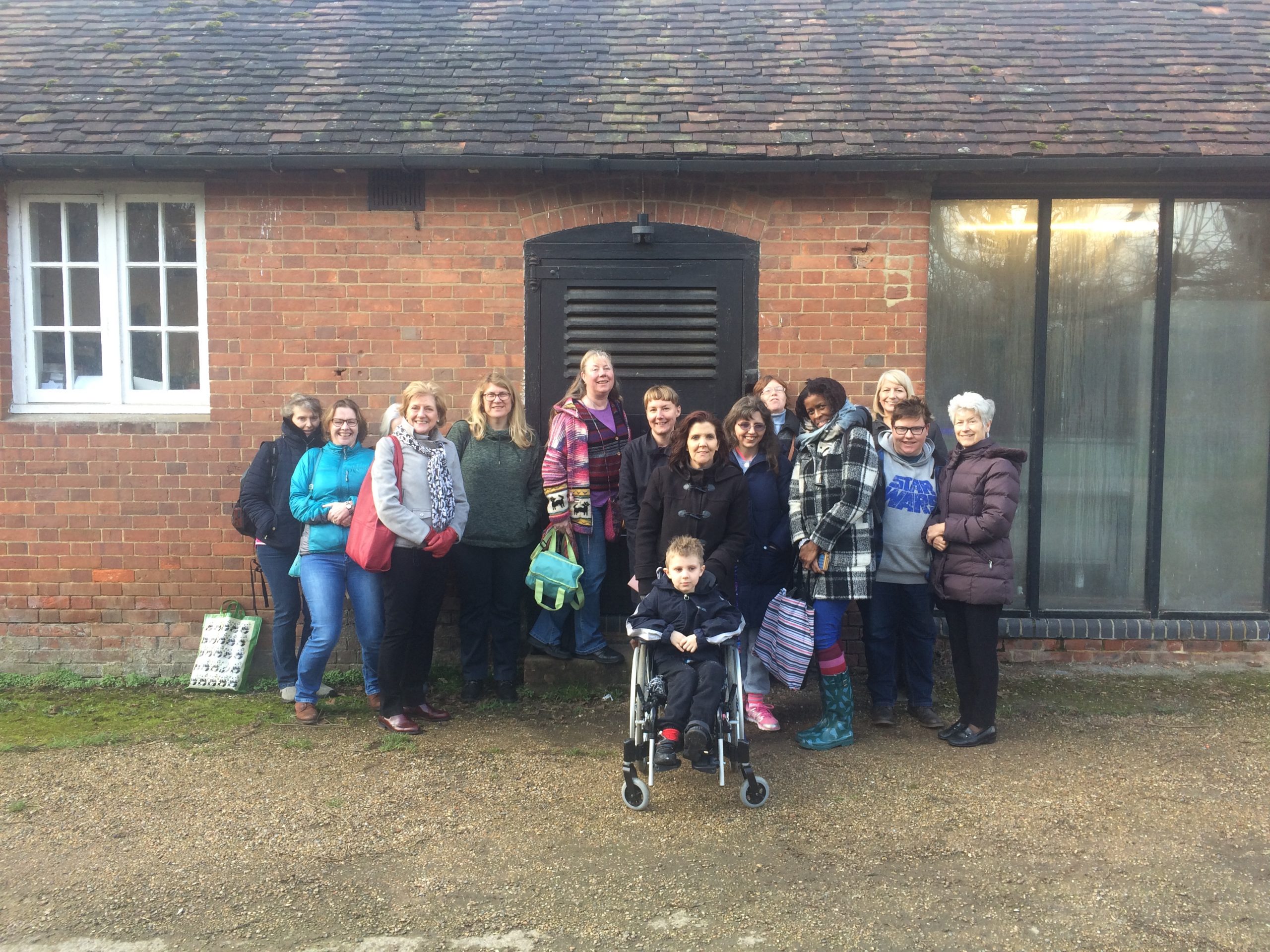 As a way of bringing members of different groups together the project also involved a trip to Blackwoods Cheese Company to see the dairy, the cows and learn how cheese is made. 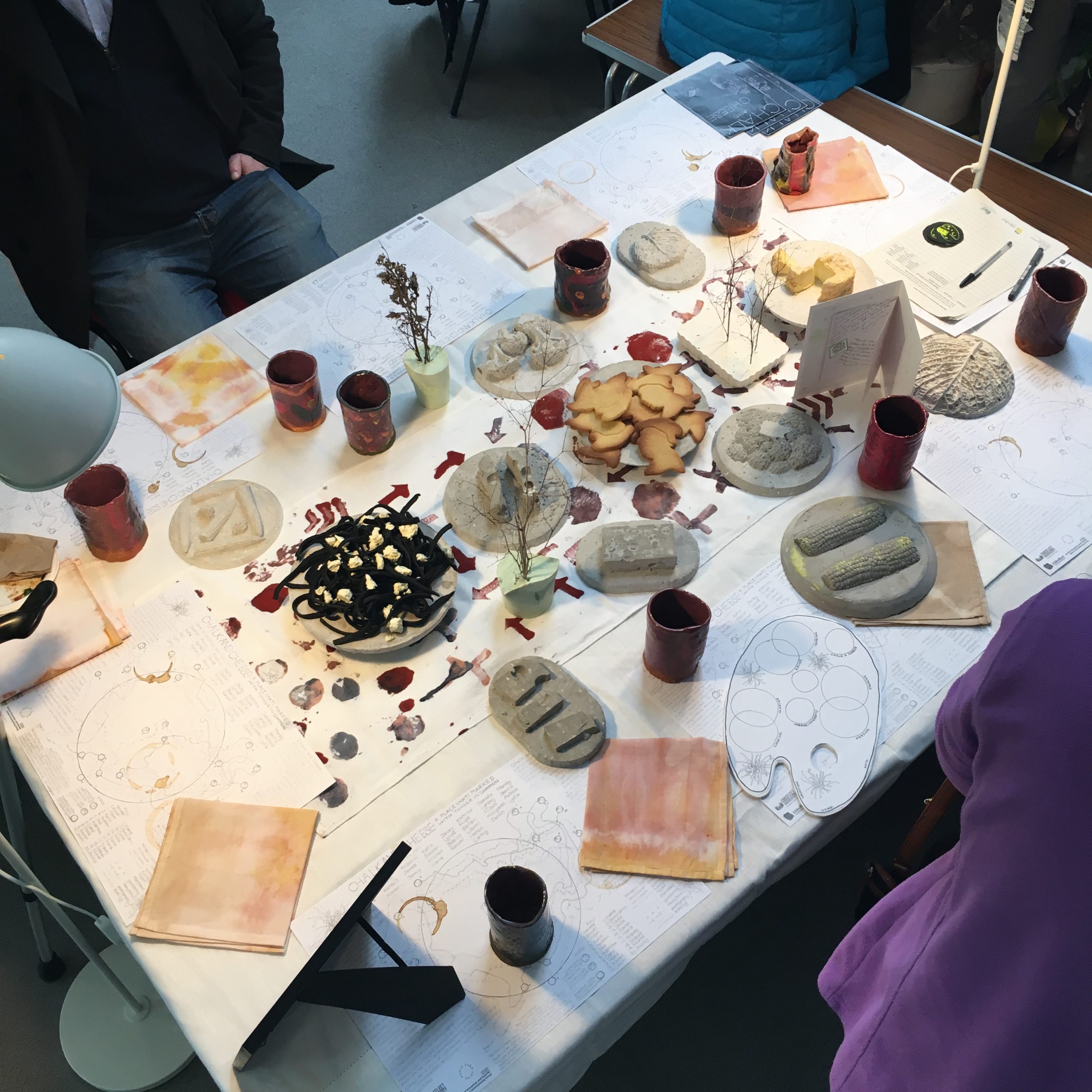 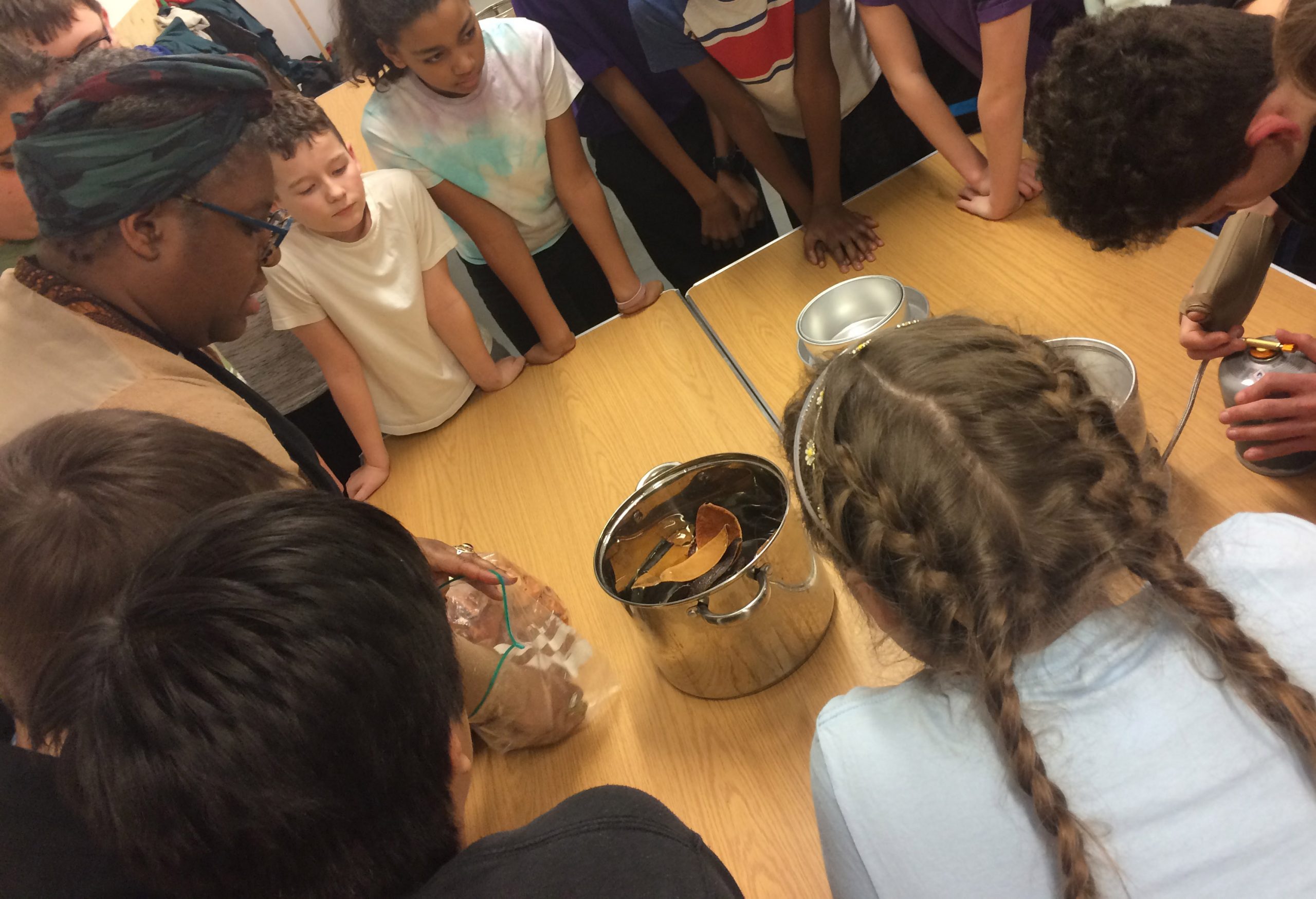 All activities were designed to work together to create a feast-like table display for The Gathering event and connect everyone who had taken part. Visitors were invited to use food containers and flowers to cast table decorations to display, and to take home. 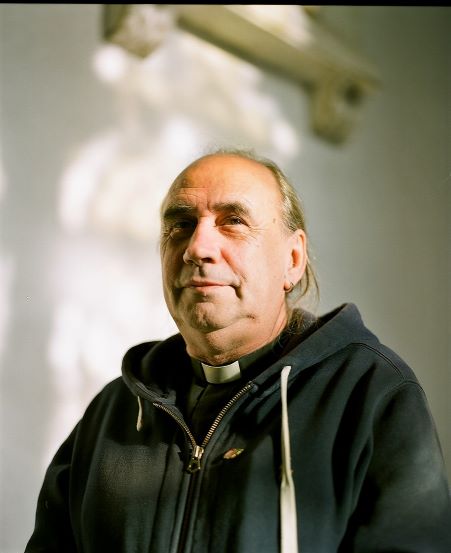 A portrait image of Reverend Mark Hurley from St Peter’s & St Paul’s Church Swanscombe taken by Chi Poon was one of the winners of the  Portrait of Britain Prize. On 2 September 2019, 100 winning images were displayed for a month across the UK on JCDecaux’s digital screens. The 200 shortlisted images are featured in the Portrait of Britain Book Vol.2. 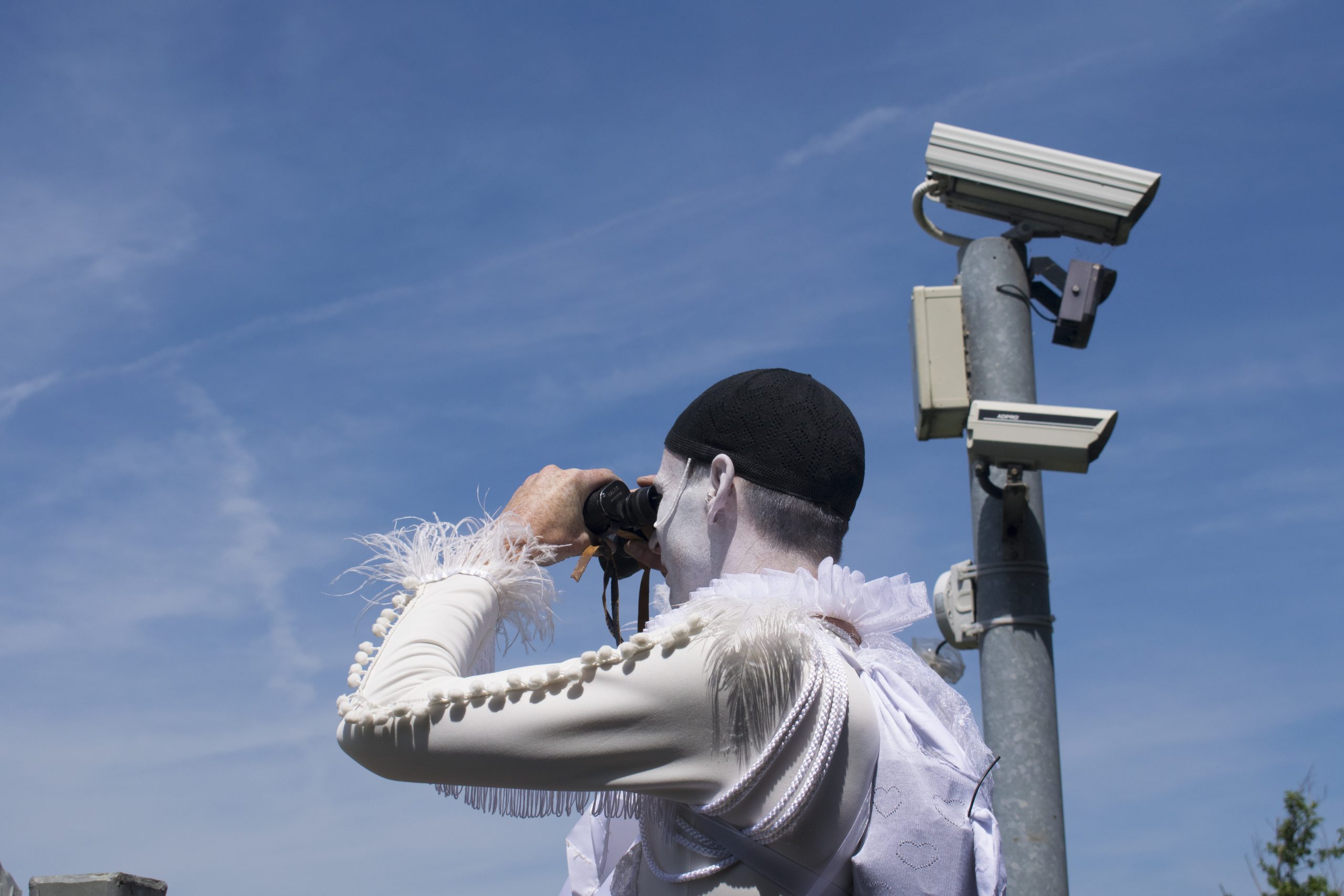 Webb-Ellis
A dotted line across the map

Artist duo Webb-Ellis invited participants to join them on a thoughtful performative stroll through Ebbsfleet Garden City, a march through its history, and a reckless leap into imagined futures of this new development at the ‘edge’ of England. Dressed as Pierrot, mutable madcap master of chaos, the artists led a sonic exploration of freedom in its many ambiguities. 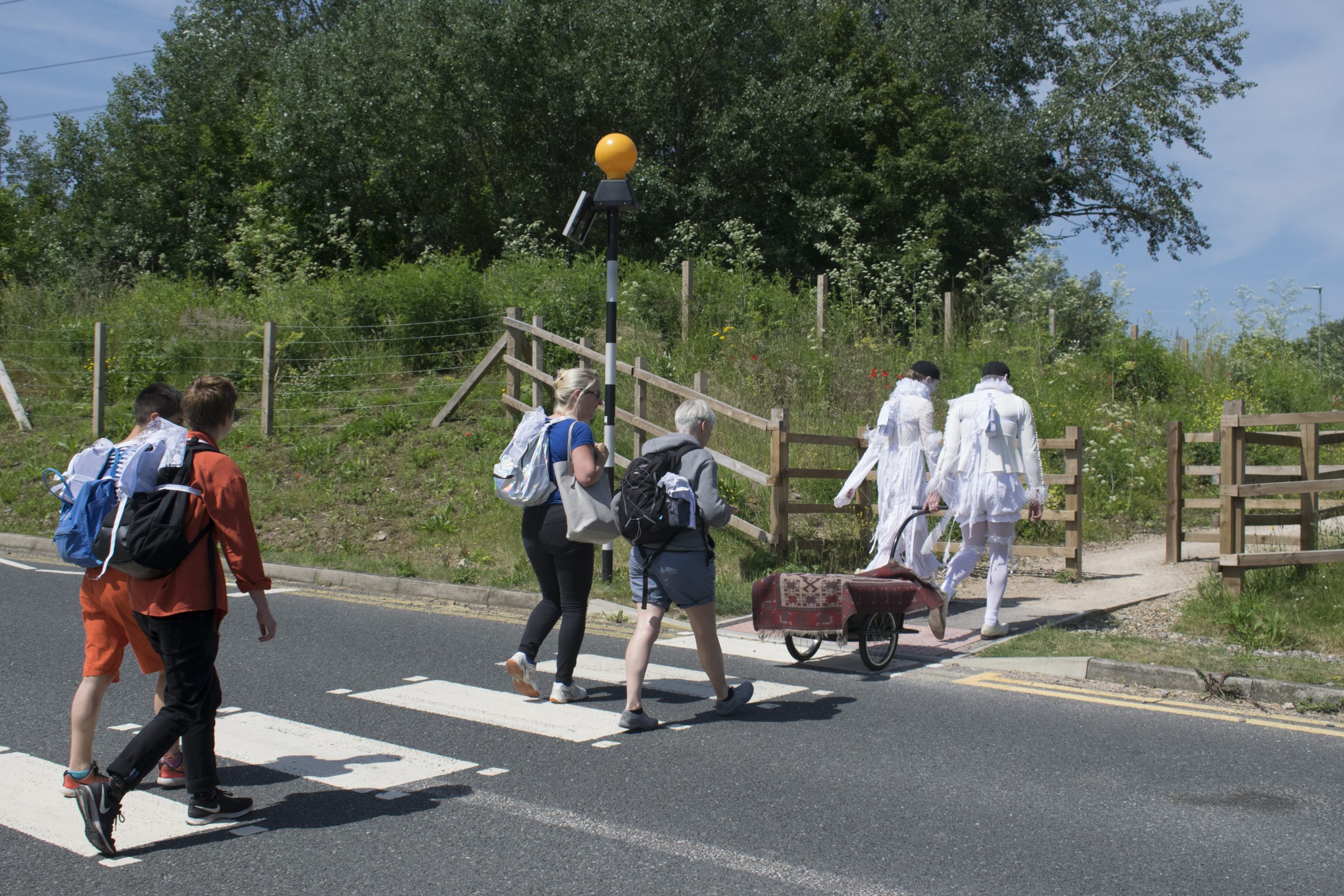 Individually outfitted with wireless speakers, tuning in and out of voices and music carried on the local airwaves, the walk explored ancient and contemporary ideas of home, community, fear and belonging, in the shadow of Brexit.

Stories of Neanderthals crossing the channel on foot, the hard-fought right to roam, and the new international rail connection, interweaved a simple celebration of moving through a landscape on foot. A disorderly ramble through orderly streets and disappearing wasteland in an age of individualism and digital alienation. 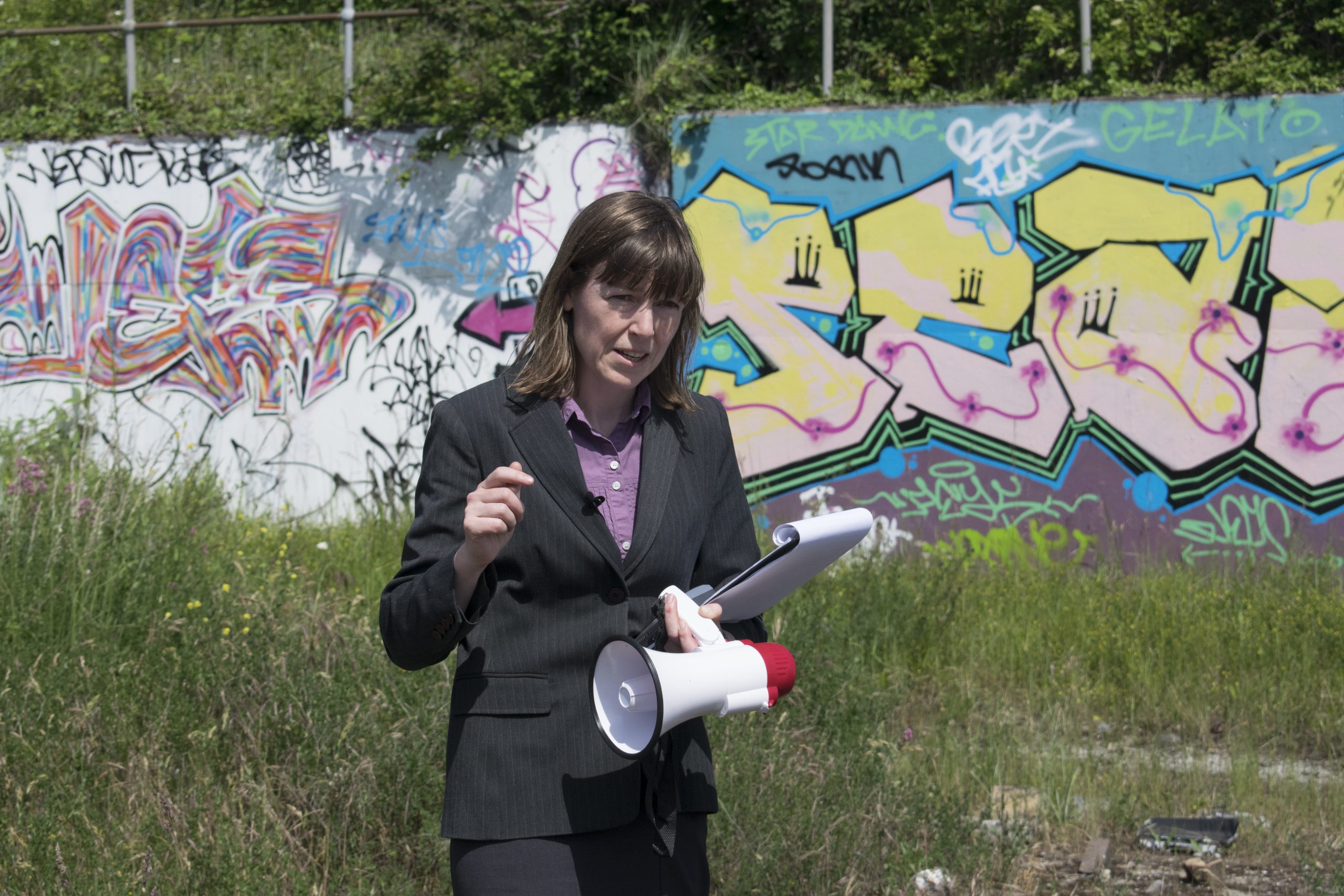 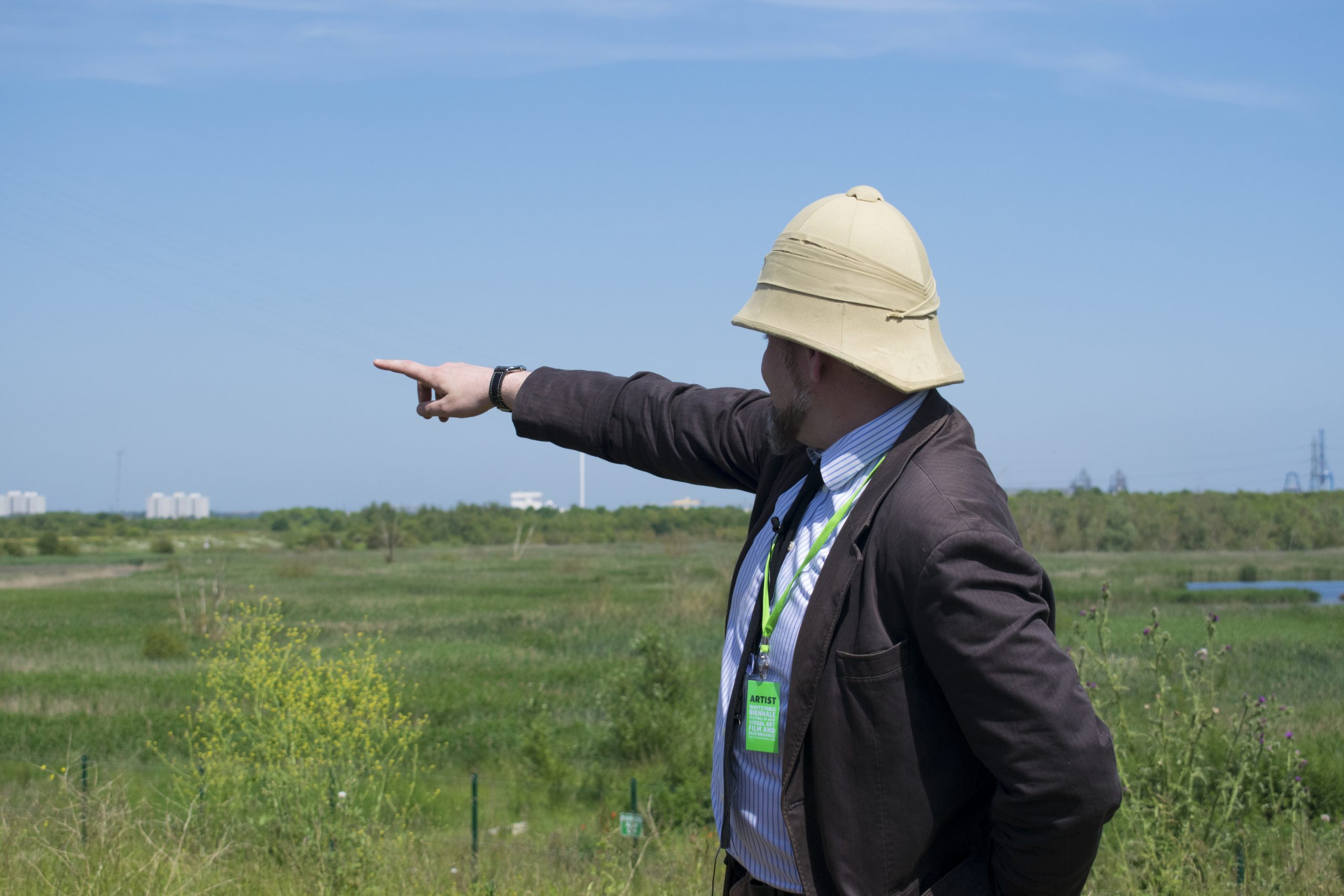 and M’Kay scoured the Swanscombe peninsular for signs of animals wild, thoroughbred, symbolic, and extinct. They hauled up pasts and planted a future theme park in a landscape where estate agent meets literary agency, where tyrannosaurus rex crosses paths with the editor of Birth Control News.

Think-Up! A creative foundation programme for schools in North Kent

In Autumn 2019, EDC partnered with local cultural organisation LV21 and Royal Opera House Bridge to devised and secure funding for a research & development programme for arts and cultural engagement through local schools. The aim of the programme was to connect children and young people, schools and communities with excellent art and cultural opportunities and experiences in response to their needs, and with focus on reaching pupils from less advantaged backgrounds. A number of schools would become Artsmark schools and help children achieve Arts Awards, whilst offering CPD for staff. Part of the process was to evaluate the possibilities for an ongoing cultural education partnership to strengthen the cultural education infrastructure across Gravesham and Dartford.

Since the start of the initial research and development phase of the, LV21 have worked with nearly 20 schools and 600 children and young people across Gravesham, Northfleet, Ebbsfleet and Swanscombe.

Unfortunately, the outbreak of COVID-19 meant that all face-to-face workshops and activity had to be cancelled. LV21 and partners re-organised the programme and teamed up with local artists to offer creative packs and demonstration videos online. 600 packs were put together and distributed to local families through school and community groups to allow young people to be creative at home. The videos and Arts Award Discover at Home intro packs are still available online here: https://lv21.co.uk/education/think-up/