Second Ebbsfleet Garden City hotel and pub is given go-ahead

Second Ebbsfleet Garden City hotel and pub is given go-ahead

Ebbsfleet Garden City is to get its second pub and hotel after plans were approved for a new destination by Britain’s oldest brewer.

The Castle Hill area of the Garden City will get a new pub and boutique hotel by Shepherd Neame after Ebbsfleet Development Corporation’s planning committee approved the plans.

The pub is described as a “21st Century family pub” by the brewer and will be at the heart of the community and on a new Fastrack bus route.

It will be called The Chalk Yard, a name based on the area’s mining history and the unique landscape it left behind.

There will be 17 individually designed rooms as well as a function room for community or private events.

Ebbsfleet Development Corporation’s Chief Planning Officer Mark Pullin said: “This is a landmark building that will be at the very heart of Castle Hill in Ebbsfleet Garden City.

“We’re very pleased that so much consideration has been given to the look and appearance and that it is so strongly based on the area’s history in what will be a high-quality building.” 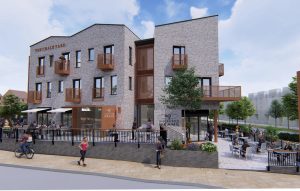 Shepherd Neame Chief Executive Jonathan Neame said: “This is an exciting project at the heart of a major development in North Kent at the strategic crossroads between London and the Garden of England.

“This fits perfectly with our programme of investment in our pub and hotel estate, providing a great drinking and dining experience and high-quality accommodation for our customers in unique and interesting locations.”

The first pub and hotel opened in 2017 in Ebbsfleet Garden City.

It also has a primary school with another being built and a third in the pipeline as well as plans for a major secondary school campus.