Ebbsfleet Development Corporation’s Board took a tour of the Garden City to see the latest progress being made.

They met with developers and saw sites around the Garden City including:

They also met with Leigh Academies Trust which is building a new primary school in Eastern Quarry which will open open in September next year. 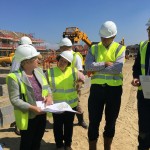 Last week, the new housing minister Gavin Barwell MP also visited the Garden City and said: “This Government is determined to build the homes people need and to help them achieve their ambition of home ownership, and I am confident we can deliver many of them in Ebbsfleet.

“Ebbsleet Garden City has great potential with its high speed transport links and I was pleased to see the progress made so far.”