An Ebbsfleet Garden City primary school and an affordable housing development are in the running for two major awards.

Clarion’s Unity Gardens in Castle Hill has been nominated for the Best New Development in the South award in the First Time Buyer Reader Awards. 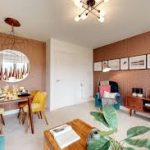 The entry says: “During a time when the South East faces a chronic housing shortage, Clarion Housing’s Unity Gardens development provides a ray of hope – particularly for those on lower incomes. The development forms an early part of the Government’s flagship new Ebbsfleet Garden City in Kent, which, when complete, will deliver around 17 million sq ft of development, including the creation of up to 15,000 new homes, commercial, retail and leisure space, new schools (one of which is already open) and community facilities, as well as up to 20,000 new jobs, all set within the beauty of the area’s former quarries.”

You can vote for the scheme here  and the winner will be announced on April 26.

And Lee Evans Partnership has been shortlisted in this year’s Royal Institute of Chartered Surveyors Awards for its design of Cherry Orchard Primary School and Community Centre in Castle Hill.

The first school to open at Ebbsfleet Garden City, Cherry Orchard Primary Academy has been well received within the emerging community. The site is co-occupied by Castle Hill Community Centre.

Intrinsically linked, but very much separate facilities, the school and community centre create a civic anchor at the heart of the new village. This scheme has been shortlisted in the Community Benefit category.

The award ceremony will be held in Southampton in May.