A series of man-made islands like the iconic Palm in Dubai could be created in the UK’s first Garden City in 100 years.

A huge lake in Ebbsfleet Garden City in North Kent could be turned into an oasis where people would be able to grow and pick their own fruit and vegetables, visit an adventure playground for all ages or take part in sporting activities. 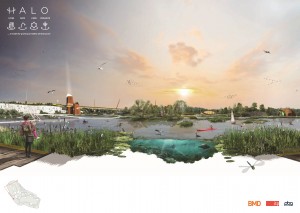 The series of islands would all be linked by walkways and one of them would be become an arts and culture island where open air productions and gigs could take place.

Floating hotel pods and an innovation area for start-up businesses would also be included as well as the Garden City’s very own beach.

And floating “eco islands” would encourage wildlife to live at the site in a series of insect hotels, bee hives and bat boxes.

The idea was the winning entry in an international landscape competition.

Called HALO, (Hives, Arcs, Links, Organics) the ambitious design would become one of the Garden City’s most prominent features.

Judges said HALO demonstrated exactly what they had hoped for – a design that was radical, but realisable.  The panel was also excited by its possibilities, particularly because the design reflected the founder of the garden city movement, Ebenezer Howard’s concept of the best of town and country life.

Managed by The Landscape Institute, on behalf of the Ebbsfleet Development Corporation and NHS England’s Healthy New Towns project, the second phase of the Ebbsfleet Design Challenge focused on the Blue Lake site within the Garden City.

Now bosses at the Ebbsfleet Development Corporation which is overseeing the plans for up to 15,000 homes and a vibrant new city centre, will look at how the scheme can be incorporated to be a dominant feature along with seven new city parks across the site. 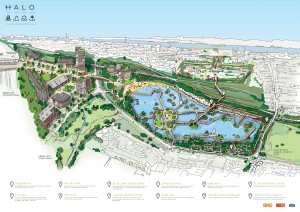 Kevin McGeough, Director of Ebbsfleet Garden City’s Healthy New Towns project,  said:  “This exciting and inspiring design exceeded  our expectations.  We have been encouraged by the innovation and the wide variety of approaches in this scheme.

“The winning design could become one of the country’s most talked about and visited attractions.”

As well as new homes, the Garden City’s first primary school, Cherry Orchard, has already opened and the area has its first  pub and hotel.

Work has also started on a new bridge which will connect  residents to Ebbsfleet International and cut down their walking time to the station from 25 minutes to eight, as well as series of new walk and cycle ways which will link all parts of the Garden City.

In March, the international design competition was launched by Ebbsfleet Development Corporation and run by the Landscape Institute to find the best creative and inspiring ideas to help shape the landscape of what will be the first new Garden City of the 21st Century, and the largest of 10 Healthy New Towns being developed in the UK.

The winner of the Ebbsfleet Garden City: Landscape for Healthy Living Competition was announced today (6th September 2018) at the annual Landscape Institute conference: Valuing Landscape 2018 – an international event organised to tackle big questions about valuing our landscape for future generations.